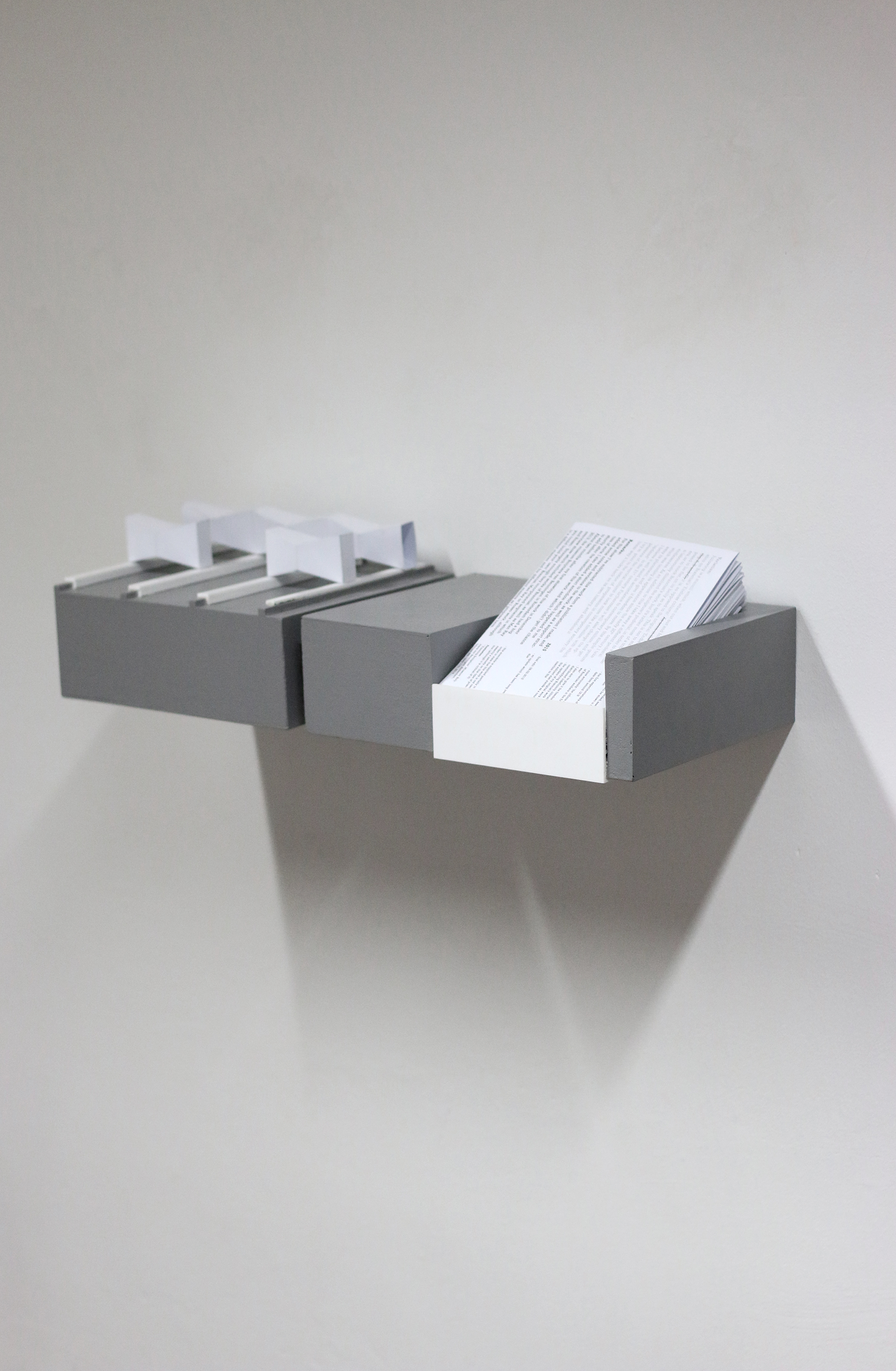 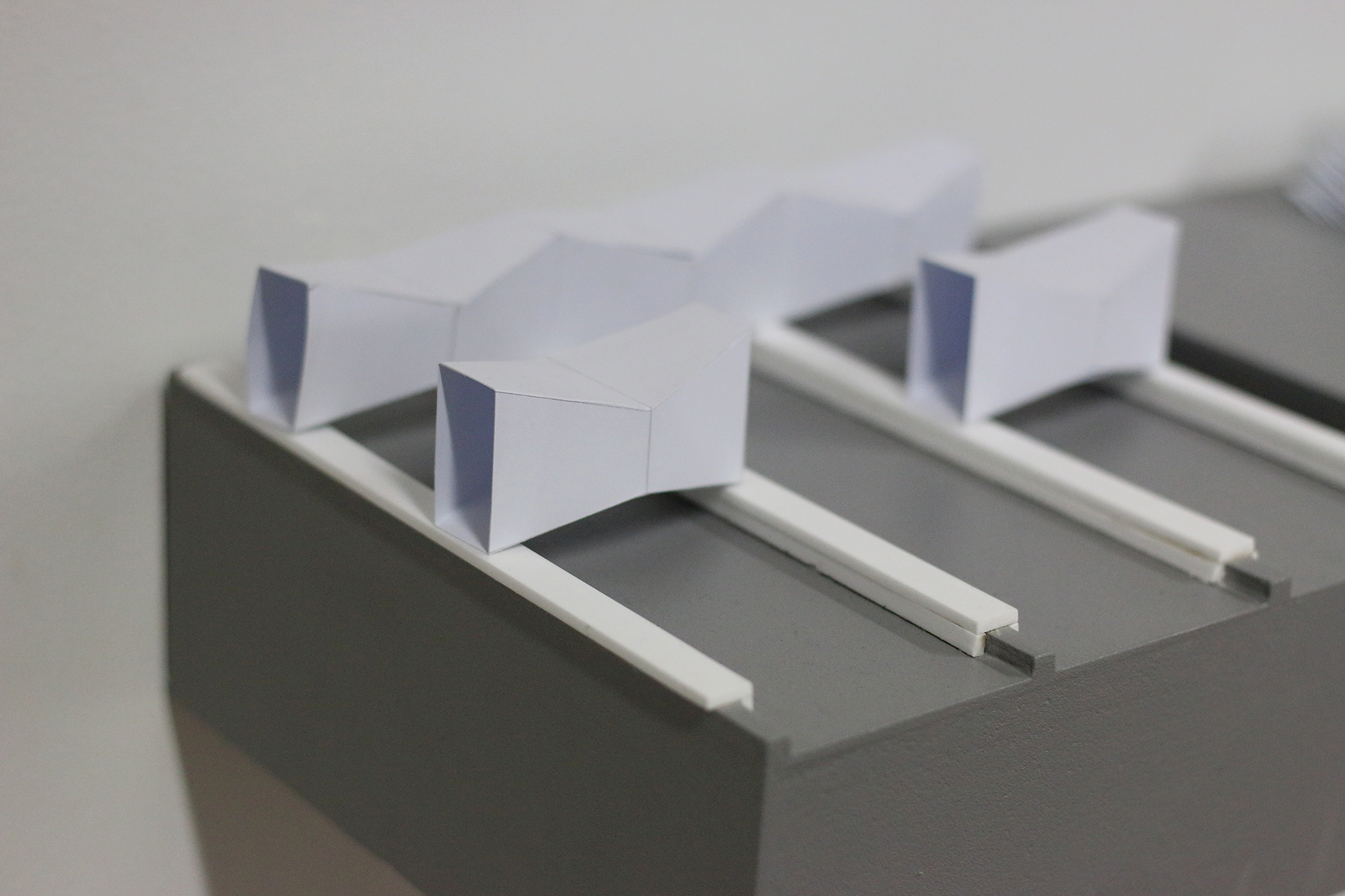 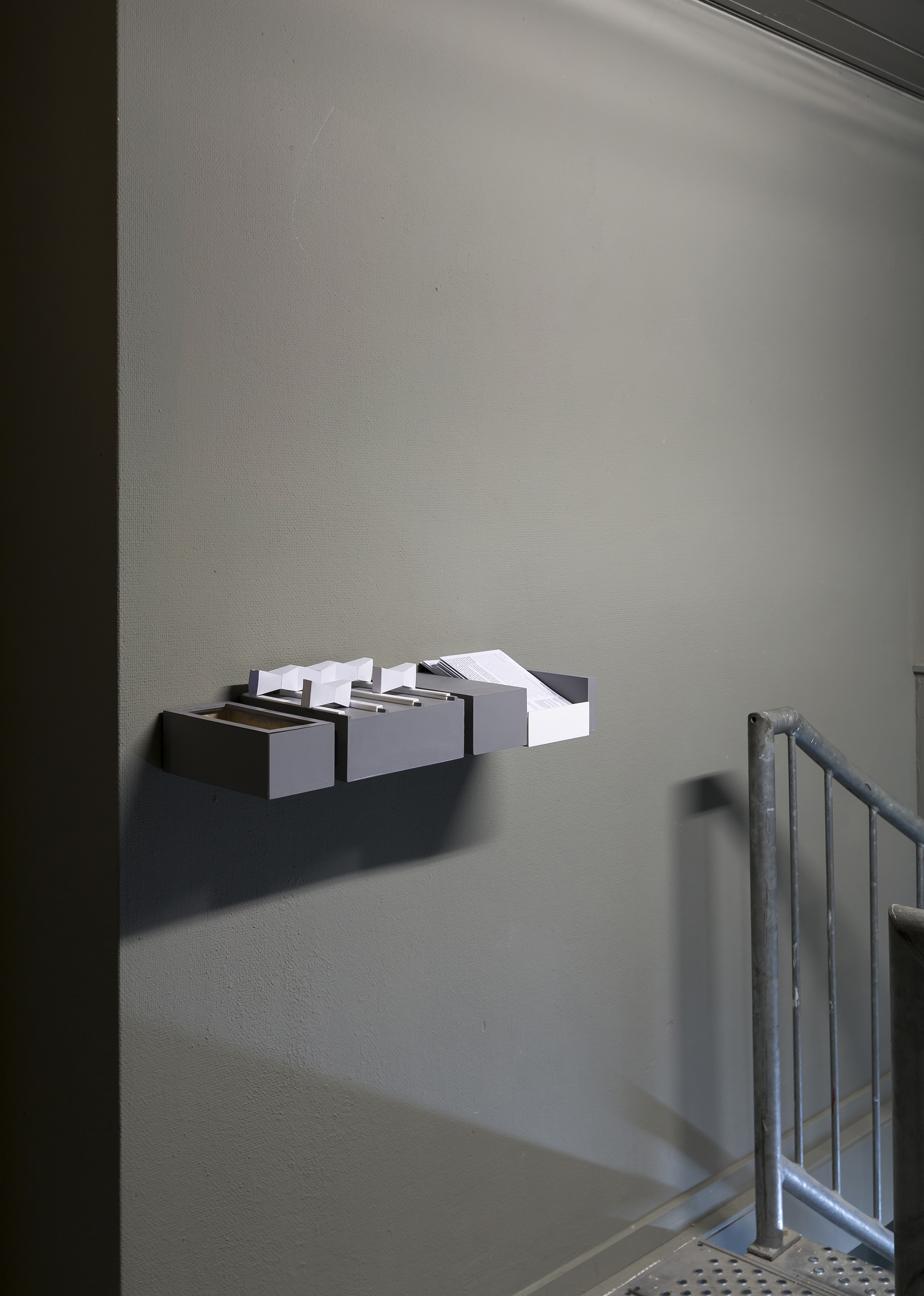 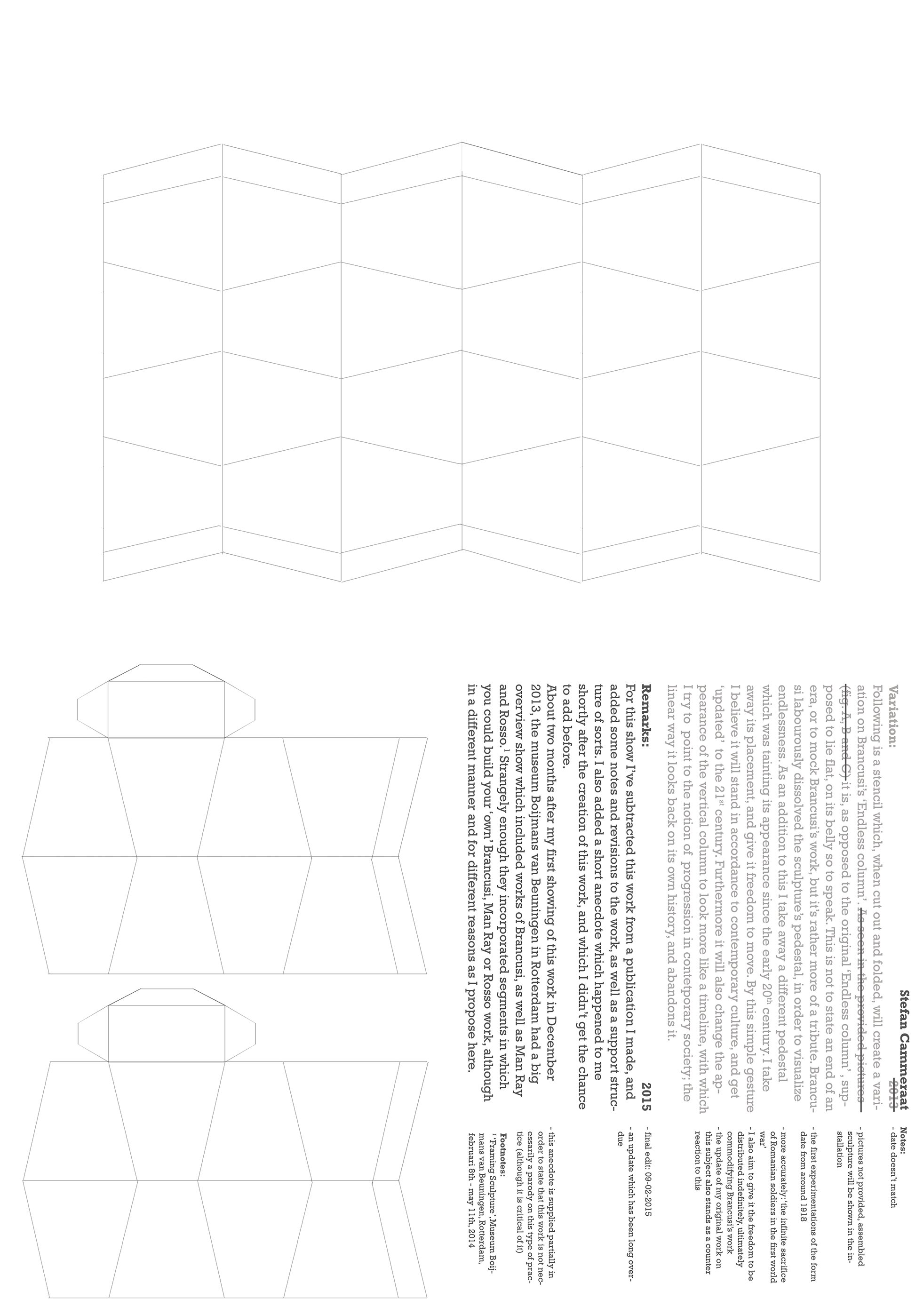 Variations, remarks, additions is a work based on Brancusi’s Endless Column. Brancusi’s column can be seen as one of the first critiques on the pedestal. I translated this to a stencil, which anyone who encounters the work can bring home. According to instructions and a cut-out on this stencil a smaller and more mobile version of Brancusi’s endless column can be constructed. The work is presented on a booklet bin based on the pedestals Brancusi constructed for his works, which were sold independently from the sculptures without his permission. Every so often this work is updated, editted and expanded upon, reflecting upon one of the most elementary problems within modernist sculpture; the pedestal. In this continuous reworking of the Endless column and its presentation, focus shifts from the object as being the centerpoint of the project, the only thing even remotely sculptural being the display- which in its design provokes modularity, and, indeed, has no permanent form or shape.

Following is a stencil which, when cut out and folded, will create a variation on Brancusi’s ‘Endless column’. As seen in the provided pictures (fig. A, B and C) it is, as opposed to the original ‘Endless column’ , supposed to lie flat, on its belly so to speak. This is not to state an end of an era, or to mock Brancusi’s work, but it’s rather more of a tribute. Brancusi labourously dissolved the sculpture’s pedestal, in order to visualize endlessness. As an addition to this I take away a different pedestal which was tainting its appearance since the early 20th century. I take away its place, and give it freedom to move. By this simple gesture I believe it will stand in accordance to contemporary culture, and get ‘updated’ to the 21st century. Furthermore it will also change the appearance of the vertical column to look more like a timeline, in which I point to the notion of progression in contetporary society; the linear way it looks back on its own history, and abandons it.

For this show I’ve subtracted this work from a publication I made, and added some notes and revisions to the work. I also added a short anecdote which happened to me shortly after the creation of this work, and which I didn’t get the chance to add before.About two months after my first showing of this work in December 2013, the museum Boijmans van Beuningen in Rotterdam had a big overview show which including works of Brancusi, as well as Man Ray and Rosso. Strangely enough they incorporated segments in which you could build your ‘own’ Brancusi, Man Ray or Rosso work, although in a different manner and for different reasons as I propose here.

For a duo-show at P/////akt, Amsterdam, with Thomas Swinkels I updated 'Variations and remarks' once again, and added a small trashbin to the structure to further emphasize the problems regarding one of the key elements of modernist sculpture: the pedestal (or the absence of one). This simple addition puts into perspective the sculptural elements of this work, by shifting focus towards the more functional and DIY based parts of the work. This relates to both the modular character of the display and the materiality of the (cheap) printed paper stencils and the participation of the audience in constructing the sculptures. By constantly reflecting upon this work, and by tweaking it to relate to the exhibition it’s shown in, I aim to stress the importance of this key sculptural question not only in relation to the presentation of artworks, but also in relation to our approach to objects in daily life.

Download the handout: Or get a physical copy when it's on show