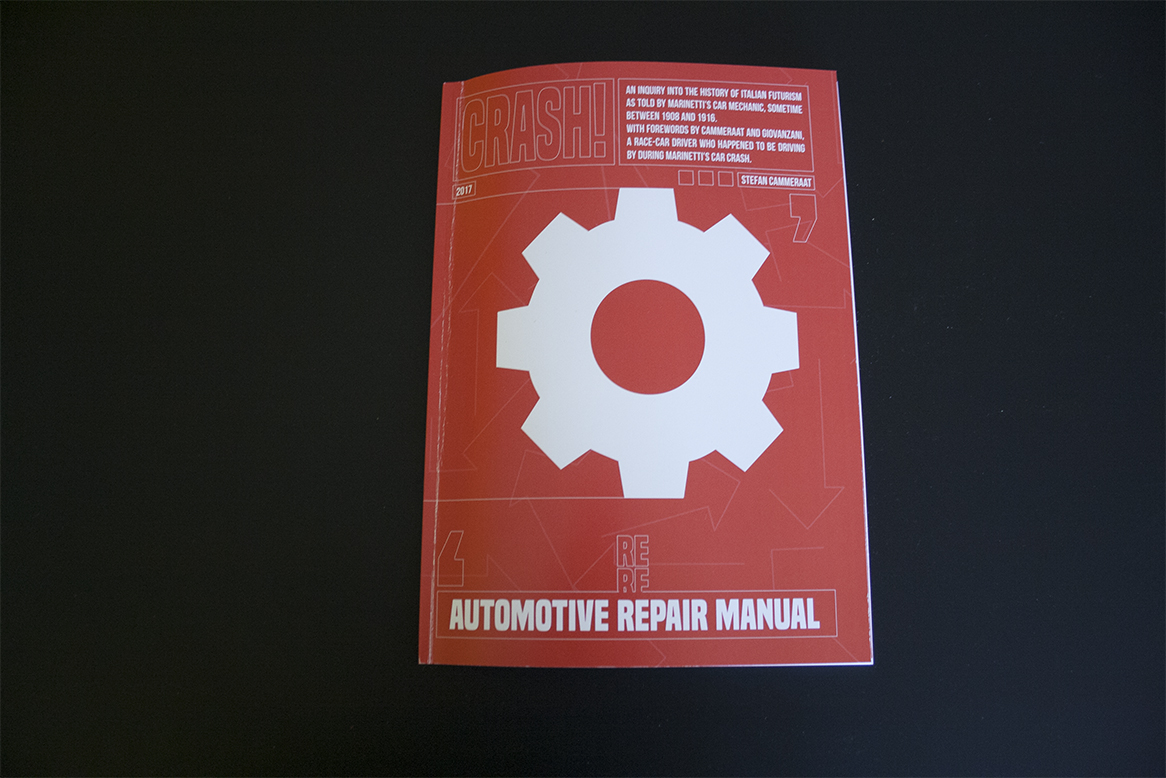 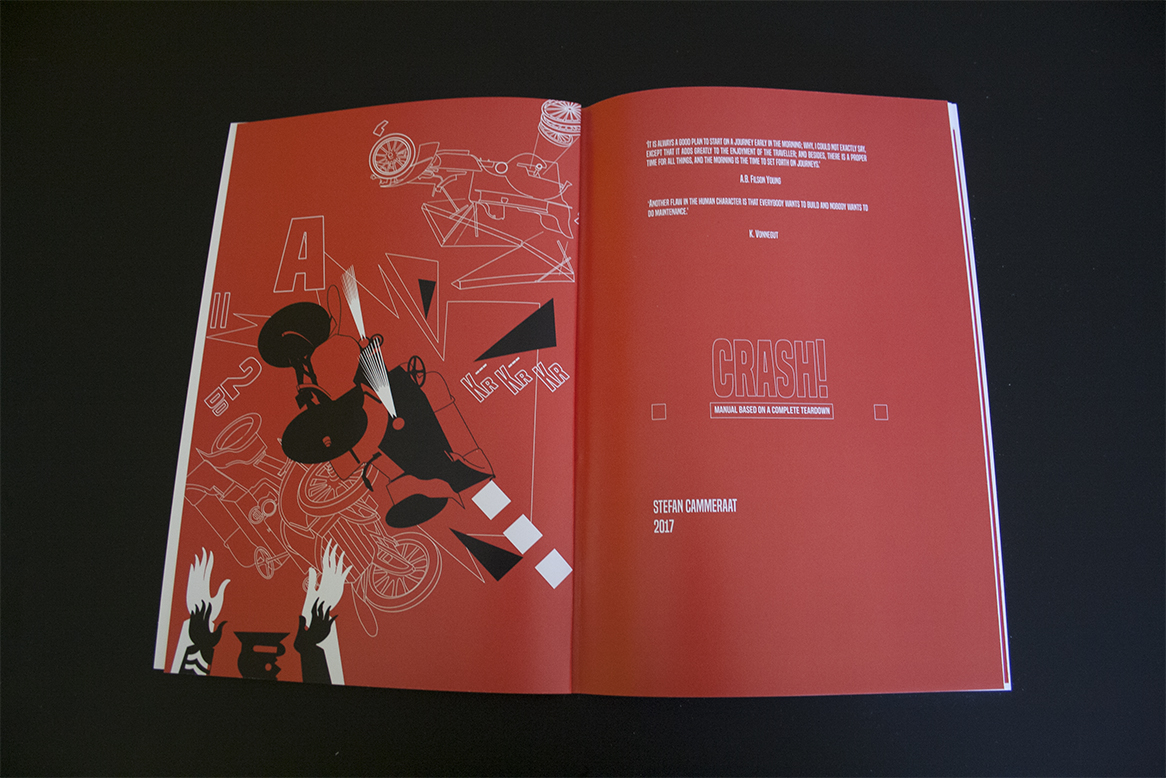 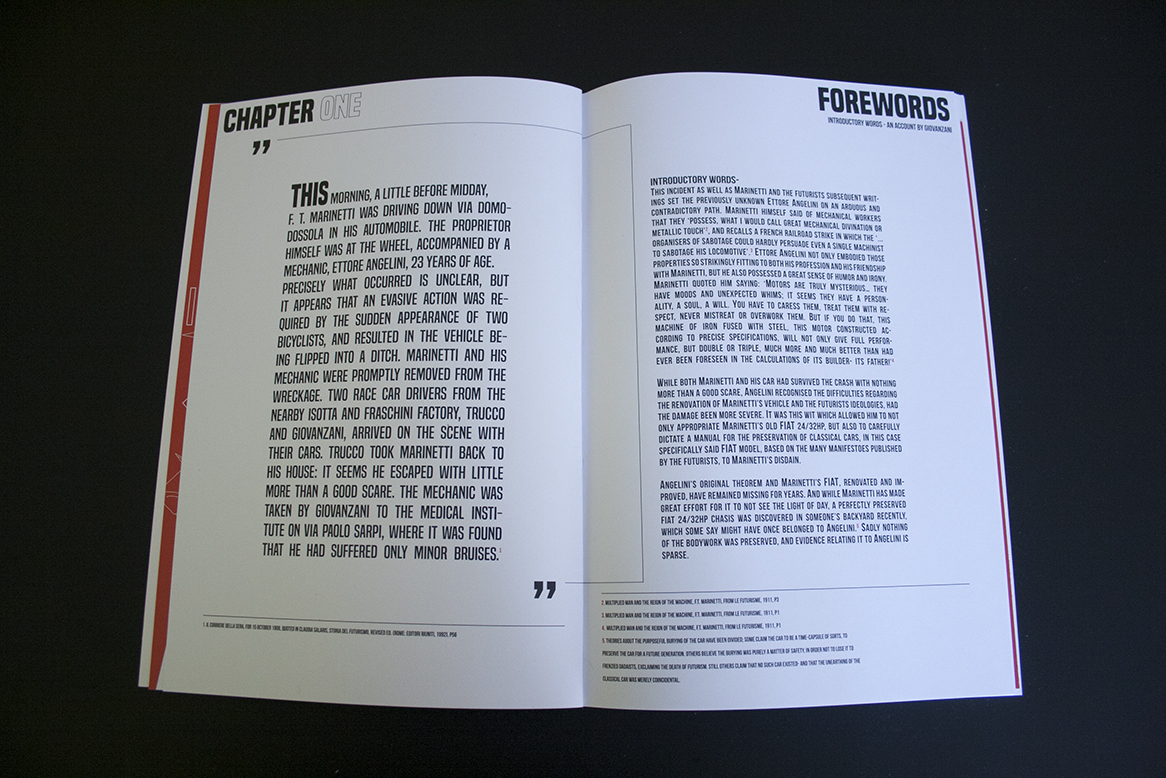 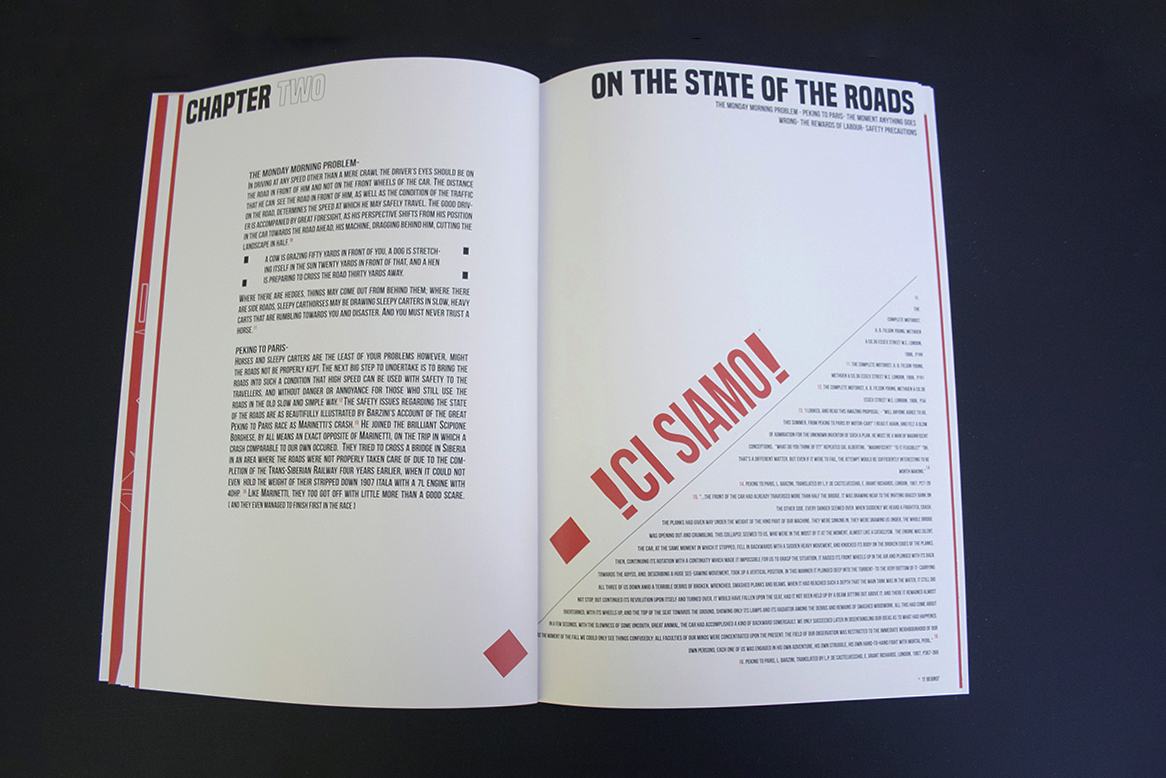 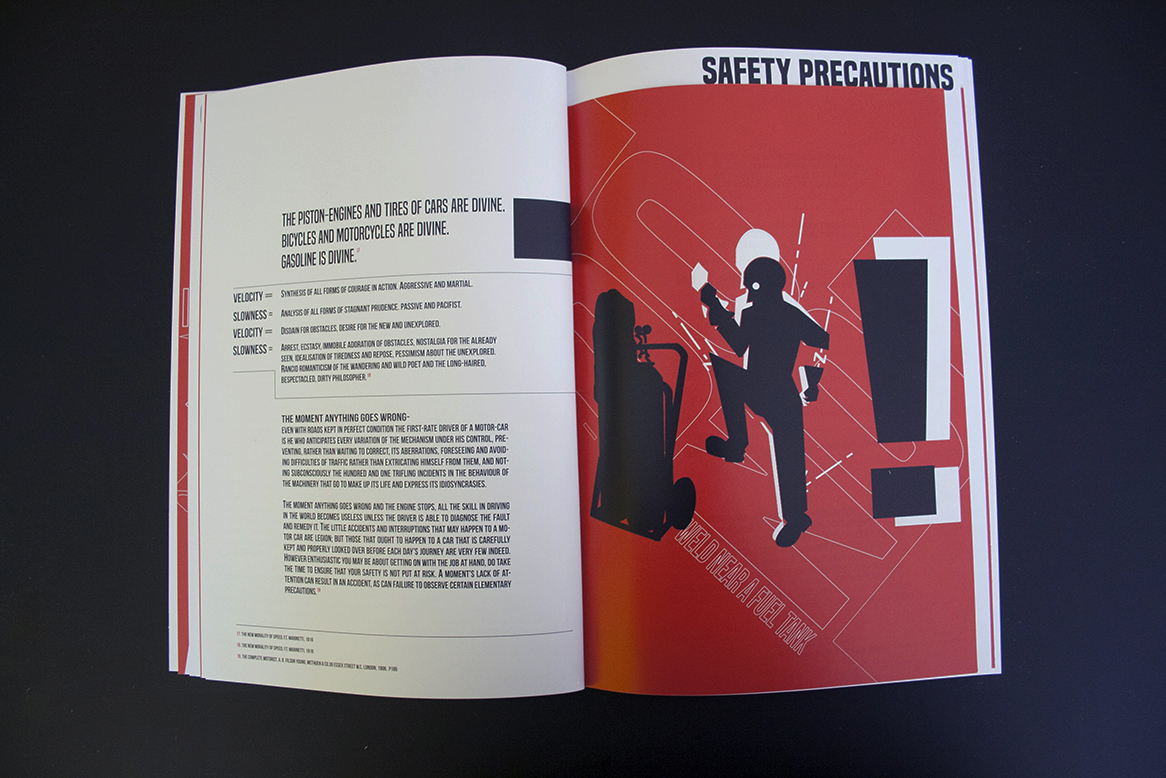 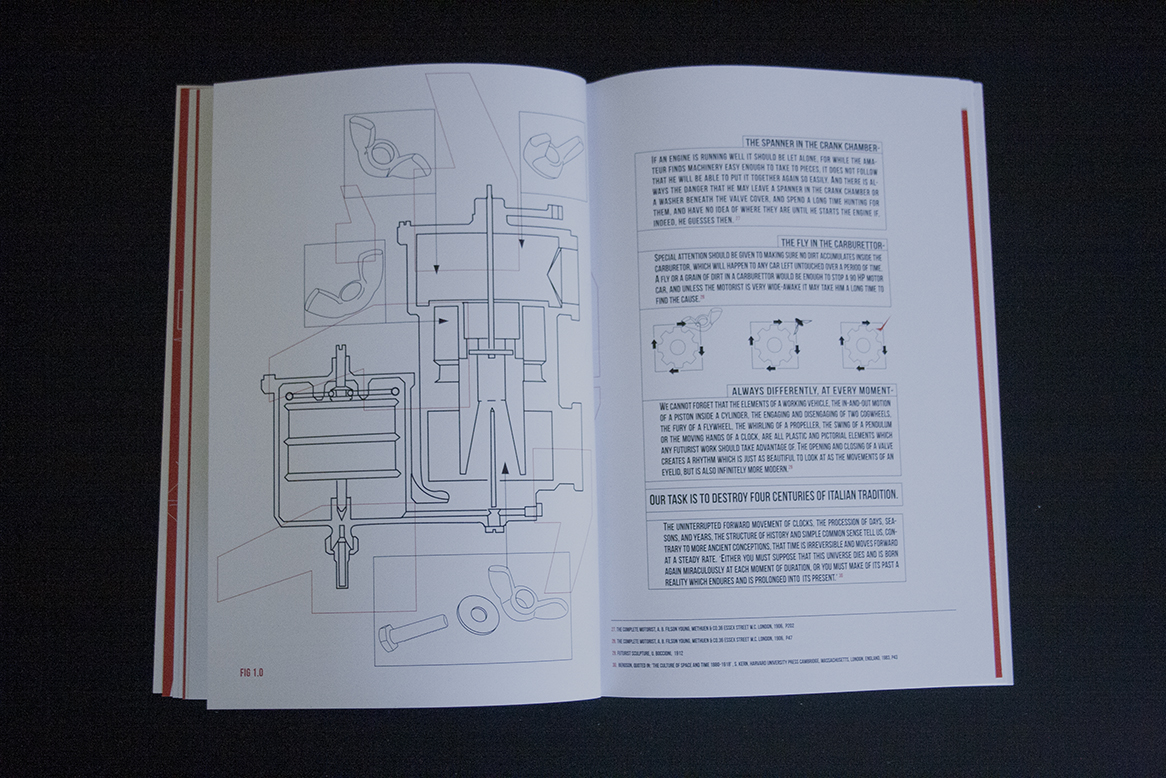 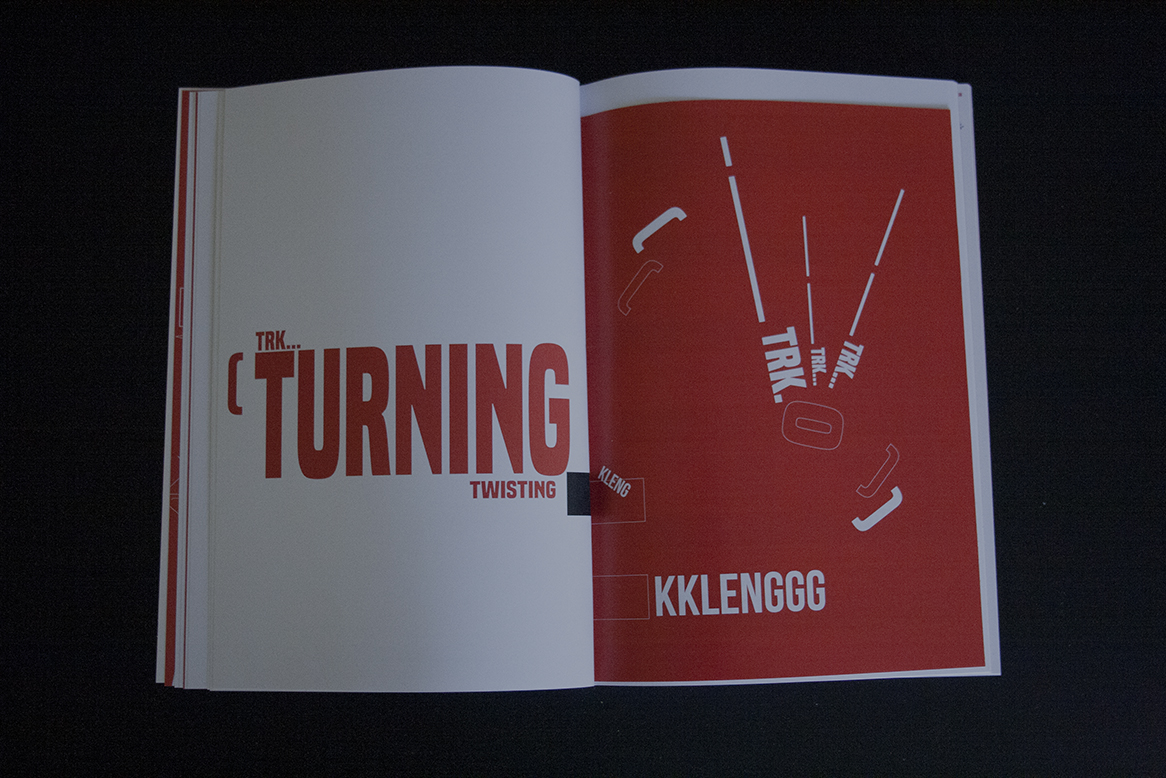 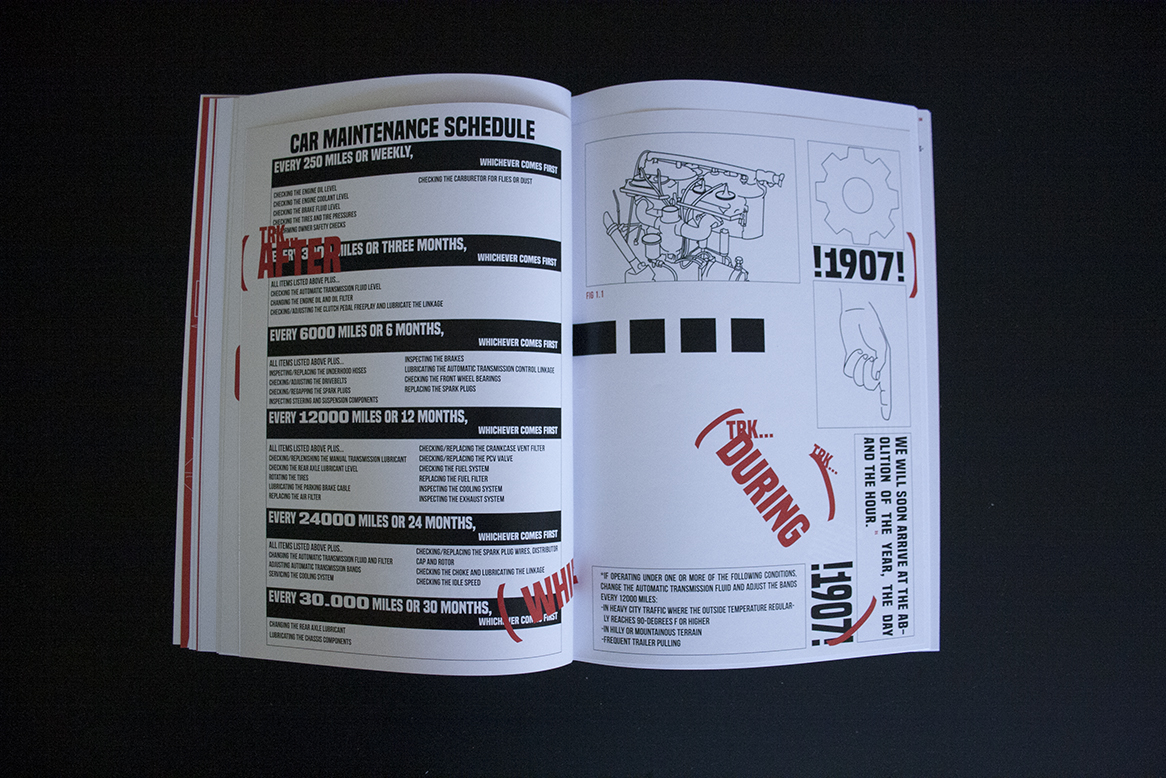 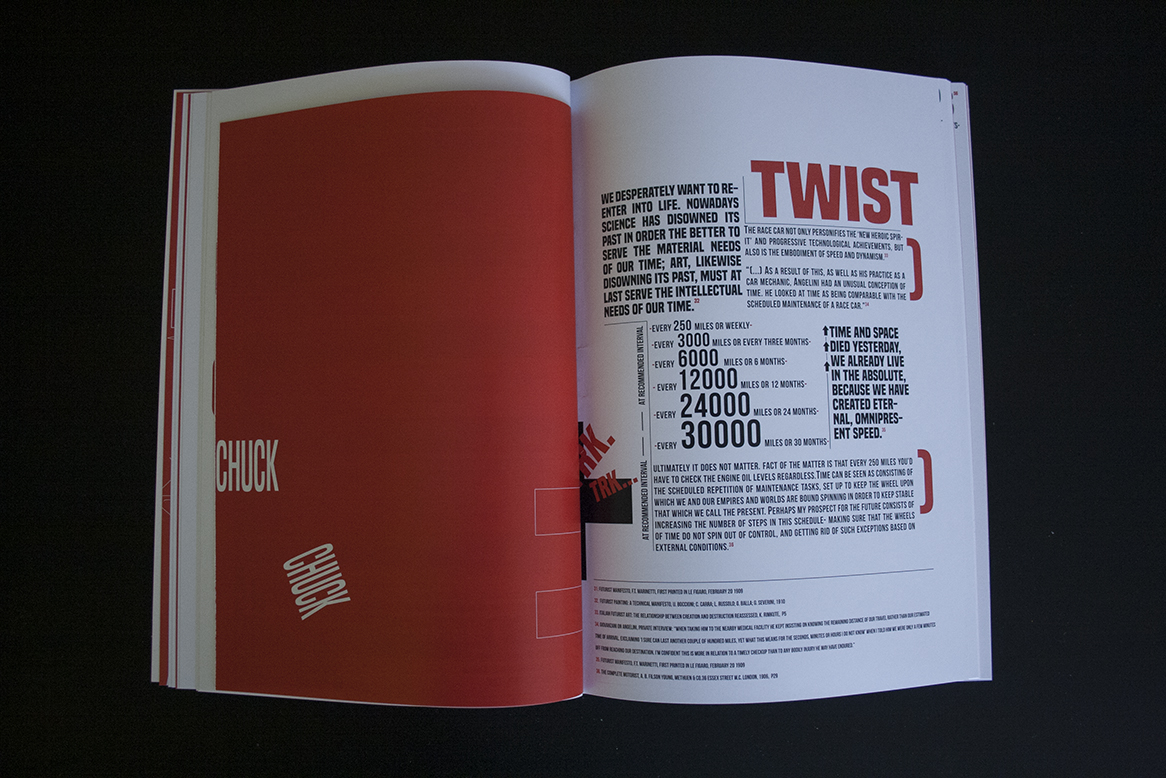 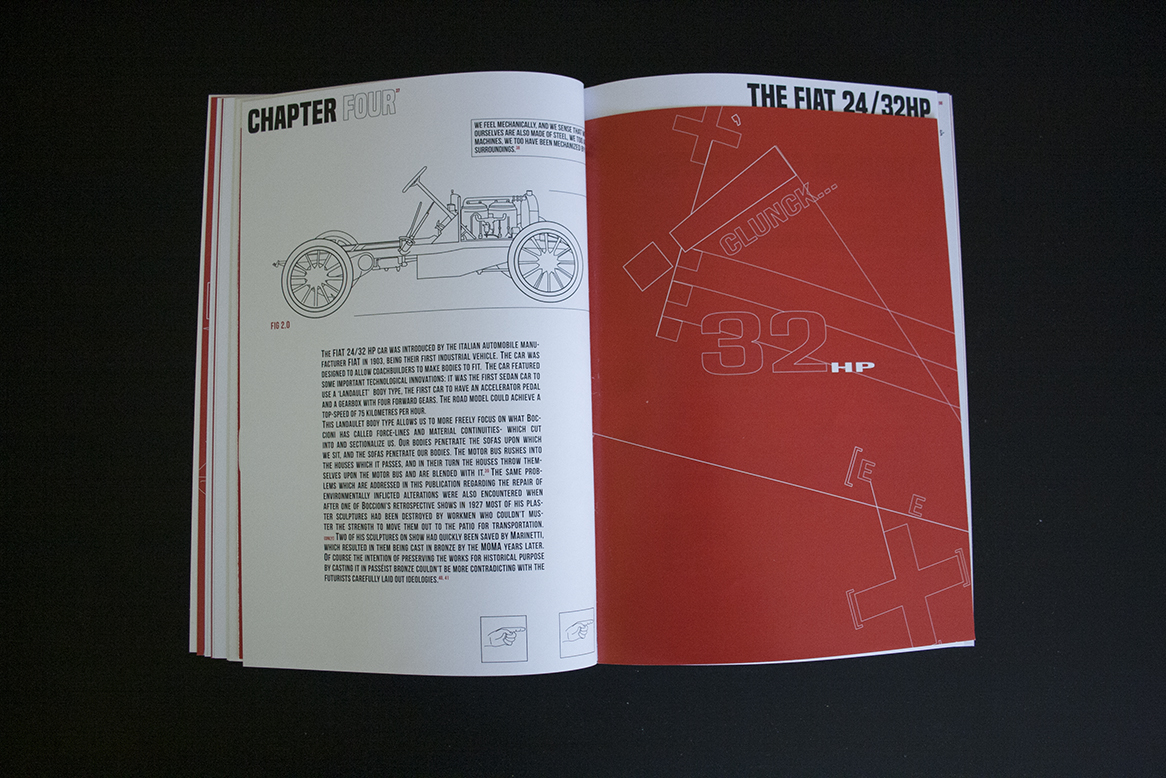 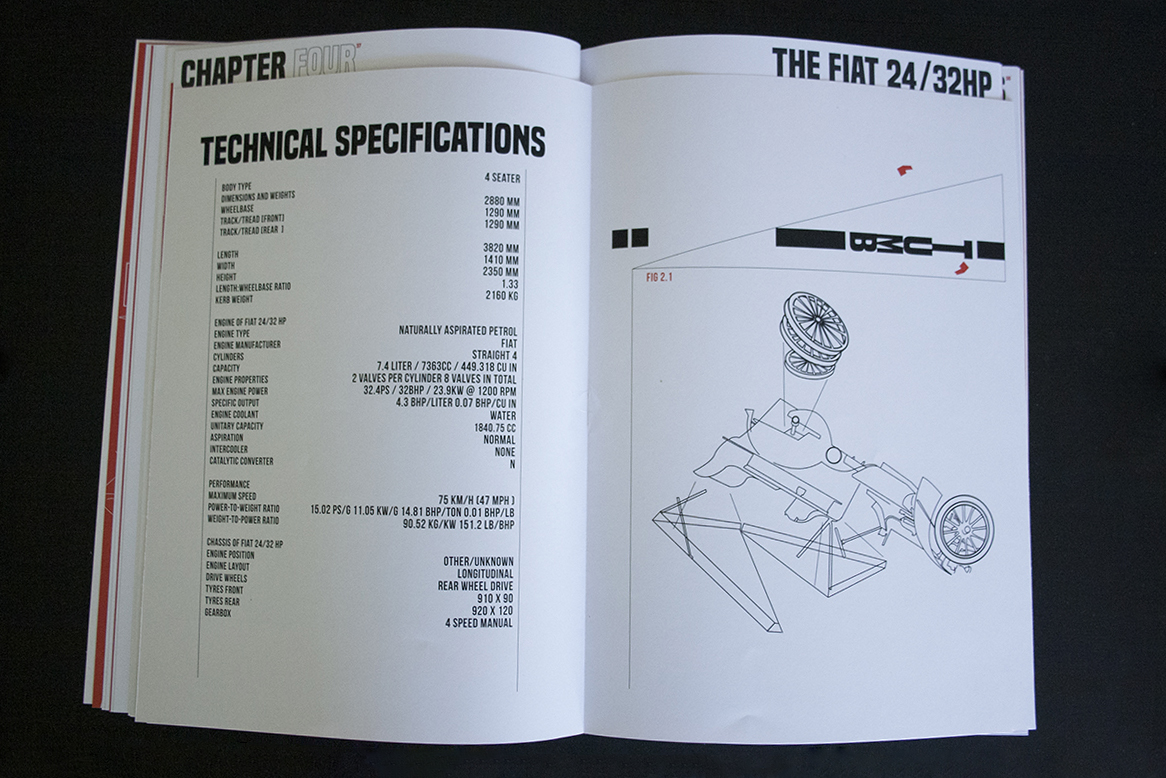 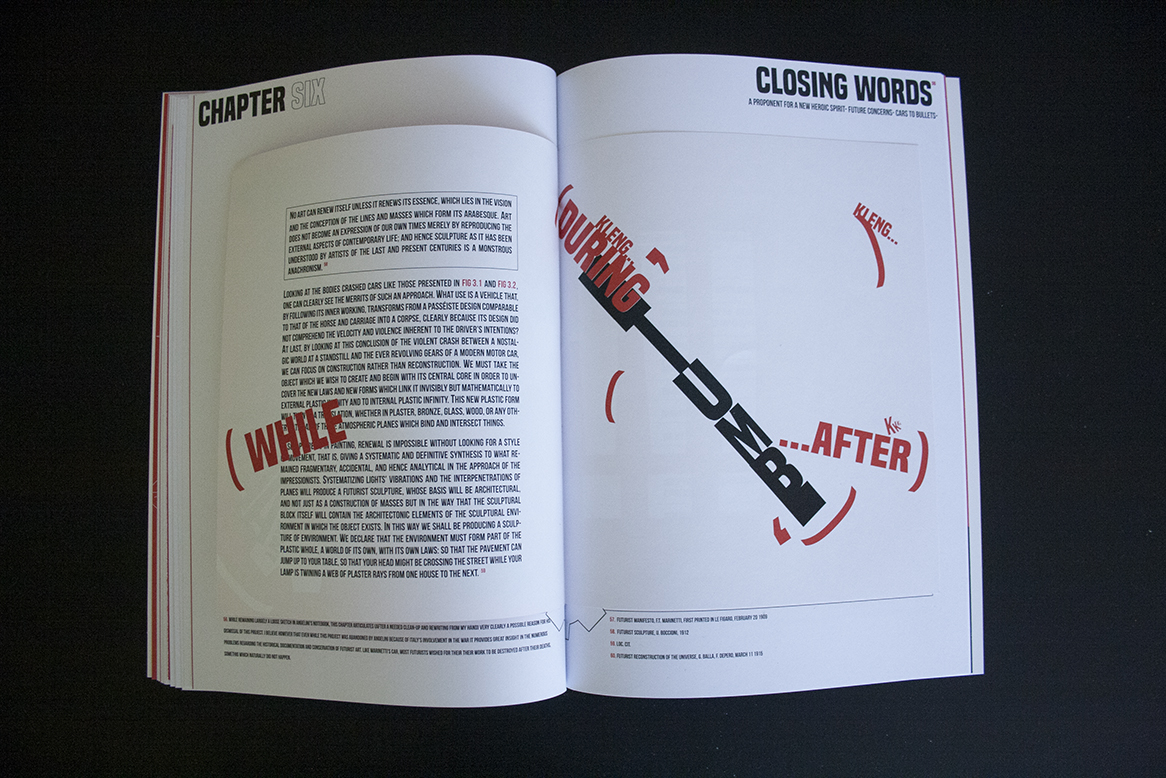 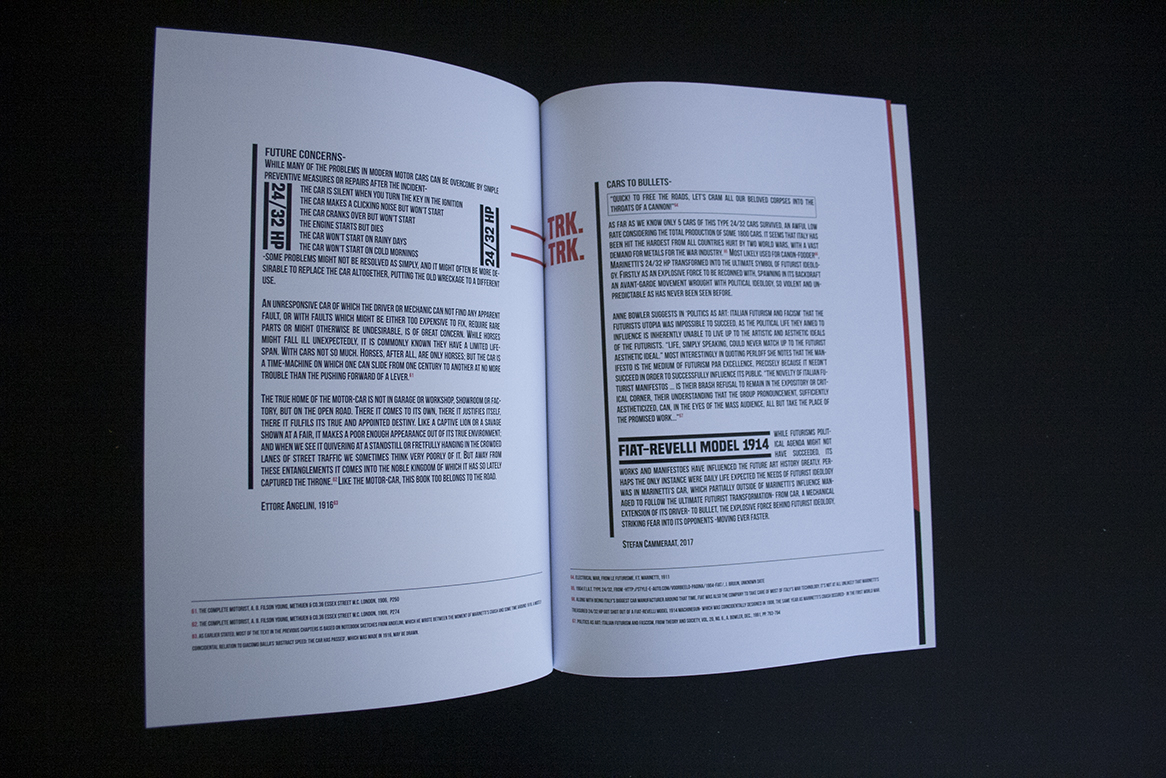 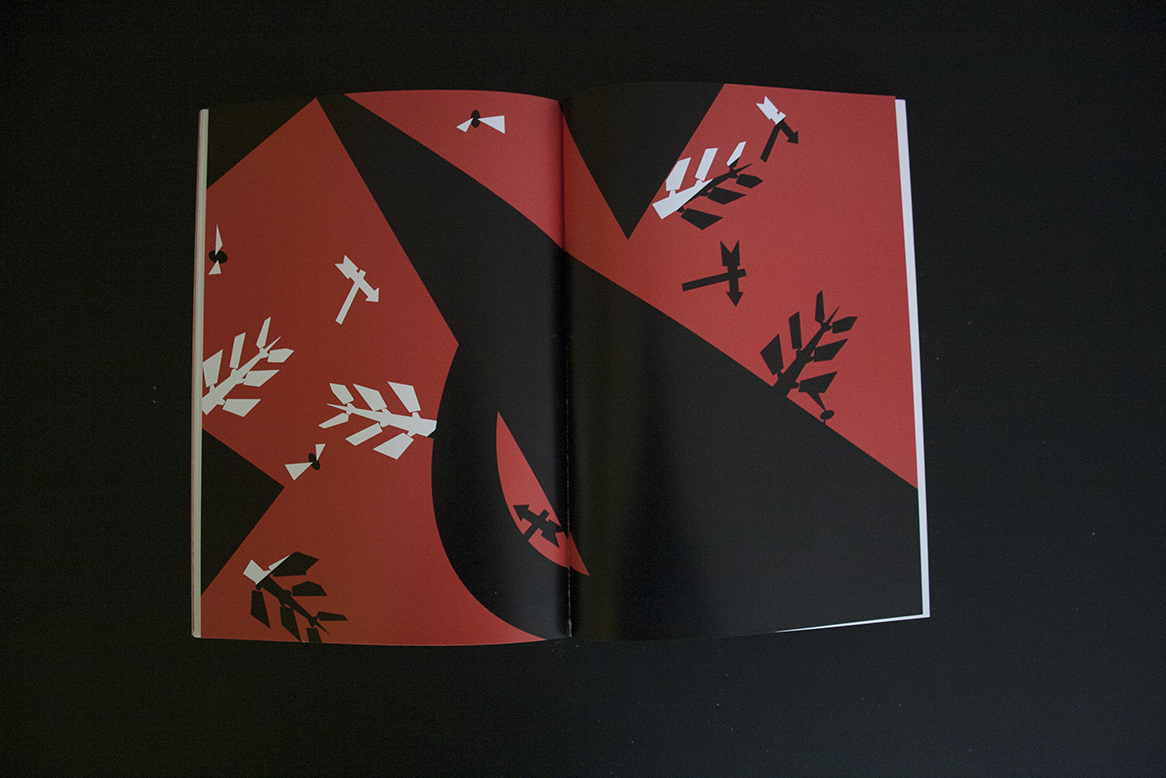 ‘It is always a good plan to start on a journey early in the morning; why, I could not exactly say, except that it adds greatly to the enjoyment of the traveller; and besides, there is a proper time for all things, and the morning is the time to set forth on journeys.’ -A.B. Filson Young

‘Another flaw in the human character is that everybody wants to build and nobody wants to do maintenance.’ -K. Vonnegut

The core of this project consists of the somewhat unlikely story of Marinetti’s car crash which forms the basis for a fictional history of the car mechanic Ettore Angelini, who happened to be traveling along with Marinetti while the crash occurred, yet who is otherwise unknown within history. 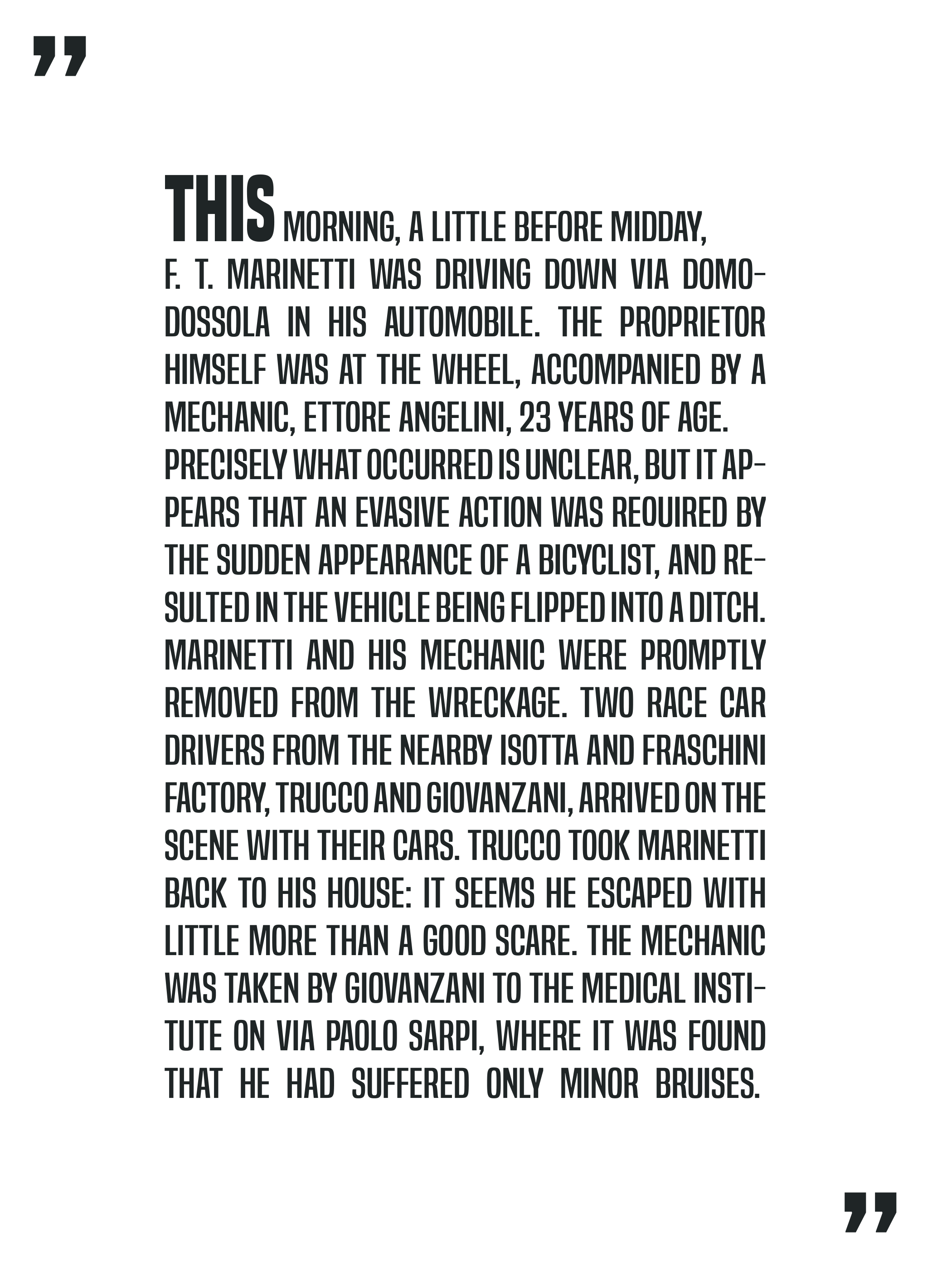 This fictional history takes the form of a maintenance manual for Marinetti’s FIAT, based on both actual car maintenance techniques employed in early 20th century and the many manifestoes produced by the Futurists. Part of the production of this journal was accompanied by three shows at P/////AKT, Amsterdam, where I gave the story a (physical) place and history. One morning in 1907 F.T. Marinetti was driving his new Fiat 24-32 HP down Domodossola when by the sudden appearance of two bicyclists he had to turn the wheel, and drove his car into a ditch. This minor incident (no one got hurt) had great cultural significance. The crash not only served as an introduction to Futurism 2 years later, but arguably functions as a mythical big-bang for all of Modernism. By taking the role of a side character to this story, Ettore Angelini, I give this story an alternative future.The crash supposedly had as much of an impact on the mechanic as it did on Marinetti himself, and being closely affiliated with the Futurists, Angelini created a car workshop manual. This workshop manual, specifically designed for the car Marinetti was driving at the moment of the crash, applies Futurist theory to that which they loved most – the speeding racecar. Naturally the workshop manual is to be read as a tool for problem-solving rather than to be read cover to cover and provides a different view on history through the strange repetitive reparation processes which the mechanic has to follow. The mechanic, Ettore Angelini, finds in the act of maintenance a suitable alternative to the conservation of a historical movement which above all wanted to “... destroy four centuries of Italian tradition”.
You can buy this edition in my shop (and others too).

Or contact me for the publication, or get a copy at the P/////AKT Bookstore